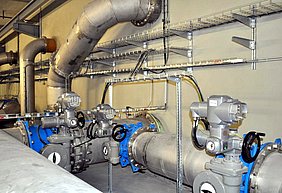 More than 180 AUMA actuators have been installed at Plzeň Water Treatment Plant in the Czech Republic as part of a major reconstruction and modernisation scheme. With a maximum drinking water output of 952 l/s the facility in the city of Plzeň (Pilsen), birthplace of the Pilsner style of beer, is one of the country’s biggest treatment plants.

The main objective of the modernisation project was to upgrade the raw water treatment facilities with the latest technology. A key part of the scheme is a new filtration facility using granular activated carbon to eliminate manganese and ammonium ions among other impurities.

Key reasons for adopting AUMA actuators for this important scheme were their reliability and robust design. In addition, their modular design allowed easy on-site adaptation to different valve requirements and mounting positions. Ease of installation and integration, and low operating and maintenance costs, were additional reasons for choosing electric actuators.

The largest valves installed were DN1200 butterfly valves. Assembly and final testing of the complete motor operated valve (MOV) units was carried out by AUMA Servopohony, AUMA’s subsidiary in the Czech Republic. AUMA service engineers also supported on-site commissioning in Plzeň and helped to integrate the actuators into the control system. Founded in 1994, AUMA Servopohony has more than 20 years of experience in supplying electric actuation solutions to the Czech water, valve, and oil and gas industries.