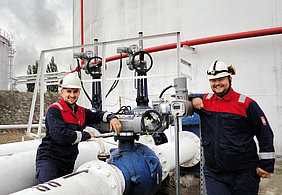 The tank farm lies on the outskirts of Koluszki, a town in central Poland, 25 km east of Łódź. Its operator is OLPP Sp. z o.o., a leader in the storage and trans-shipment of liquid fuels in Poland. OLPP uses the tank farm to store fuels for distribution, and to maintain national strategic fuel reserves. OLPP is part of Poland’s PERN group, which stores and transports crude oil and other hydrocarbons.

The actuator project is part of a new system to protect the Koluszki storage tanks against over-filling. OLPP wanted to add a dedicated emergency shutdown (ESD) function to the tank valves, alongside the Profibus DP system used for normal control.

In May 2017, AUMA delivered and installed 94 new SAEx .2 actuators with ACExC actuator controls, which feature both Profibus DP and a separate hard-wired ESD input. 29 existing AUMA actuators were also retrofitted with the ESD functionality.

Other work by AUMA included designing and supplying adapters to connect old non-standard valves to the new actuators, removing the old actuators, replacing over-current protection devices, and make changes in the control room to provide the 24 V DC electrical supply needed for the ESD system.

AUMA actuators with Profibus DP support all three versions of the protocol (Profibus DP-V0, DP-V1 and DP-V2) at speeds up to 1.5 Mbit/s, corresponding to cycle times of approximately 0.3 ms per actuator. Each segment can support up to 126 devices, with cable lengths up to around 10 km. Options include redundant cabling for increased data communication safety, overvoltage protection up to 4 kV, and fiber optic cables to cope with long distances that are frequently encountered in tank farms.